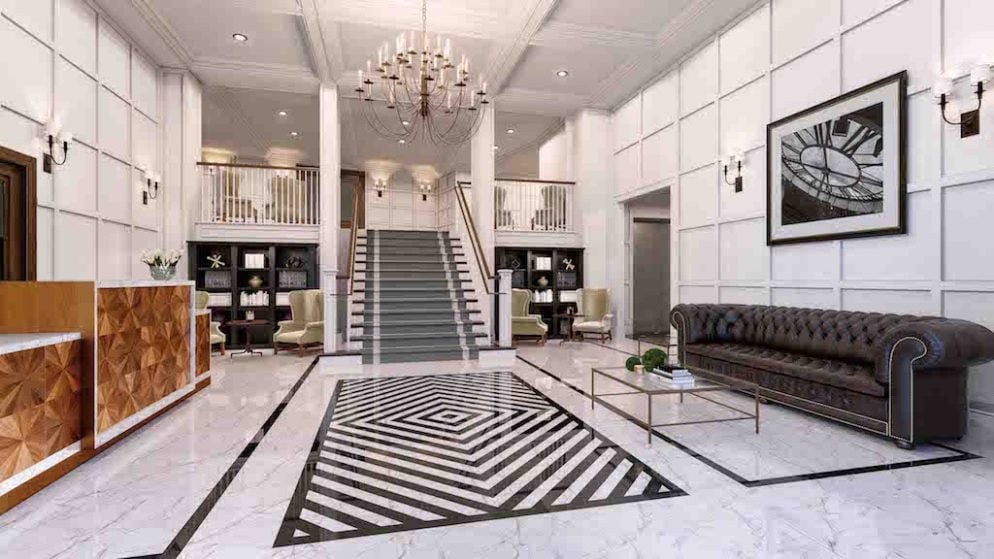 The lobby of the Signet. All renderings courtesy of JBG.
As other Washington suburbs have doubled down on creating vibrant, walkable, transit-oriented downtowns, McLean has remained largely unchanged. Its “downtown” mostly consists of parking lots and low-rise commercial buildings. But JBG’s new project, the Signet, seeks to bring McLean at least a baby-step closer to the mixed-use ideal that prevails elsewhere around the DC-metro.

The luxury condo project will be the first new residential development to open in McLean in more than ten years when it finishes in summer 2018. Currently under construction at 6900 Fleetwood Road, on what used to be a parking lot, the building will include 123 units atop 5,000 square feet of street-level restaurant and retail space. The condos will range from 950 to 2,800 square feet, priced from $800,000 to more than $2 million.

Designed by Franck & Lohsen Architects, Page Architects, and Bill Rooney Studio, the Signet sticks faithfully to the traditional, brick, neoclassical look that reigns in the suburb. JBG is starting pre-sales of the building  and holding a launch event on April 19. For now, here’s your first look at renderings of the building.